Make a back up of (at least) the following files:

It is possible to install different RadiMation® versions on the same PC.

This functionality can be used to verify the correct functioning of the RadiMation® software before it is used for EMC testing. Simply put, the functioning of the new version can be checked by comparing it with the older version. This verification can for example be required by internal quality assurance standards. During this verification process, the installation of the older RadiMation® version can still be used for all EMC tests.

Software updates can be distributed on CD or downloaded from the RadiMation® Download page.

Installing from a network directory

If the already installed RadiMation® version was installed from a network directory, the new setup file can be copied to the <Setup> sub-directory of the <NetworkDir>.

The new RadiMation® version can then be installed on each computer from this directory.

After the new RadiMation® version is installed, we strongly recommend that you install the latest device drivers as well. These device drivers can be installed by starting the ‘DRIVERS.EXE’ program that is located on the delivered CD.

You have successfully obtained the latest released version of RadiMation® when both the software and device drivers have been updated.

Every new RadiMation® version is tested extensively before it is released. DARE!! validates these new versions on three ‘levels’. The fourth level of the validation is to be done by the end-user.

This quality management system follows the ISO/IEC 17025 standard (“General requirements for the competence of testing and calibration laboratories”).

The ‘automatic knob pushing program’ simulates an end-user and is run on each RadiMation® version. The program performs all the actions that a user could do, such as entering information, executing tests, reviewing test results and generating reports.

Performing the first validation level is a responsibility of Raditeq.

2) Validation and usage in a test lab

During this validation the RadiMation® software is installed in a real test lab, to perform measurements on a 'known' EUT. These results are then compared to manual measurements to verify the quality of the software. The results are also compared with the measurement results of previous software versions.

Performing the second validation level is a responsibility of Raditeq.

3) Validation and usage in a test house

This validation level consists of two stages. In the first stage the software is used to perform measurements on a 'known' EUT. These results are then compared to manual measurements to verify the quality of the software. When the new software version has passed the first stage, it progresses to the second stage where it is installed and used by Kiwa Dare Services for at least two weeks. Any issues that are reported during this period, will be investigated and resolved. An updated version of RadiMation® is created if needed.

Performing the third validation level is a responsibility of Kiwa Dare Services.

When this validation is succesful, the RadiMation® version will be officially released, and will become available for all end-users.

When end-users receives a new RadiMation® version they should perform a validation of the software in their own test setup. The parts that should be validated by the end-user are:

We strongly advise to only start to use RadiMation® after this validation is performed.

Performing the fourth validation level is a responsibility of the end-user.

RadiMation 5.2.16 contains several improvements and some new functionality of the multiband tests for Radiated Immunity and Conducted Immunity. With these multiband tests, it is now possible to perform an immunity tests with different settings for each frequency band. A possible different setting for each band is the ‘test-site’, which makes it possible to use for example different amplifiers and antennas in the same test. The advantage is that the test results are presented in a single graph.

Another big improvement in the Multiband immunity tests is that an unlimited number of test-levels and limits can be specified for each band. The levelling loop will always try to level the generated power to reach all of the specified test-levels (so including the highest test-level) but it will never allow that any of the specified limits is over tested.

More information of the test is present in the EUT window

During the generation of the ||EUT|ALL TESTS|| code, the code will be replaced with the test-specific template that is specified for all tests. During the inclusion of the test-specific template, all the report generator codes that are specified in the 'test-specific' template will be replaced with the information of the associated test. If multiple tests are performed on an EUT, then the 'test-specific' template of each test will be included. The order in which the tests are included in the final report is the same as the order in which the tests are shown in the list of performed tests. This order can be changed in the 'report generator window' (in the 'advanced' part). Certain tests can be moved up or down, and it is also possible to remove the mark in front of the test, which will prevent that the test will be included in the final report. Only the tests which are marked will be included in the final report. 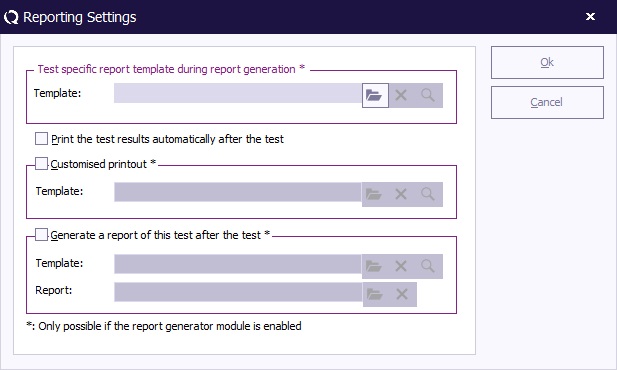 The report generator of RadiMation supports the usage of SQL Queries on tables that are provided by the report generator. This makes it possible to include a customized table in the final report. In combination with the 'SQL' queries, more advanced tables can be created like:

The simplest SQL statement is:

Where '' is an existing report generator code that includes a table in the report. This simple SQL statement can be extended with:

See below the list of all the issues that have been solved in RadiMation version 5.2 since version 5.1.0.

It has been detected that on very fast PC’s, the communication with modern Rohde & Schwarz spectrum analyser/receivers can be corrupted. These problems are related to the speed of the PC and the used GPIB bus. The R&S receivers that are related to this problem are: ESI/ESIB/ESPI/ESCI/FSE/ESU.

We strongly advise that you slow down the GPIB communication speed between the PC and R&S receivers. Follow these steps to do so:

Configuring the R&S device drivers in this way will slow down the GPIB bus, by ensuring that at least 3 milliseconds delay are included between each GPIB call to the R&S devices

This error is raised because a file that is shared by both versions is written in a newer file format that cannot be read anymore by older software. The solution for this problem is to remove the file: C:\Program Files\DARE Development\RadiMation\Confdvdr\CUSTOMIZ.DAT. The CUSTOMIZ.DAT file is used to remember customizations of the colour of the graphs, so removing the file will not influence the measurements. However the graph colours will probably be changed to the defaults as specified by RadiMation®.

Due to the fact that Microsoft has ended their support for Windows 95, 98, ME, NT, 2000, XP and Vista we are also forced to stop the support of RadiMation® running on the Microsoft Windows 95, 98, ME, NT, 2000, XP and Vista operating systems. In addition also the Windows 7 operation system without Service Pack 1 is not officially supported by Microsoft anymore. This means that we do not test if RadiMation® is working correctly on these operating systems. However it could be that RadiMation® is still working correctly. We strongly suggest upgrading your operating system to Windows 7 Service Pack 1, Windows 8.1 or Windows 10. Both the 32-bit and the 64-bit versions of the Microsoft Windows Operating system is supported.

Currently we are improving our service to the end-users that have a support contract. These users will in the future be able to download the User Manual and other information from an internet site. We will soon provide you with the information and instructions.

We think that this letter contains all the information that is needed before your system is upgraded. If you have any additional questions or remarks please let us know through your reseller.