The input configuration is selected by pushing the Input button in the TSF window of an immunity test. A window like the one shown below will appear. 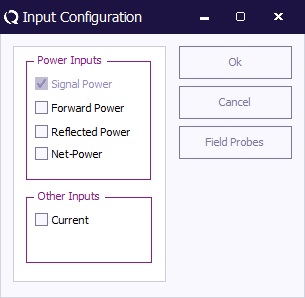 The input channels of the RadiMation® software are implemented to monitor output signals of the EUT as a function of the test frequency. The software is able to monitor each channel before, during and after each test frequency. This way of data storage is useful during certification tests as well as during the development process of a product.

The inputs channels allow automatic and accurate monitoring of EUT performance. Together with the output channels, full automatic tests can be performed without intervention of the test engineer.

The Software is able to support a maximum of 8 A/D converters. For each A/D channel, two graphs can be recorded ('before field' and 'during field' graph). As an alternative, RadiMation® can also read data from oscilloscopes, audio analysers etc and use it as an A/D input signal. In this case, the operator should select the device driver for the measurement device (for example the oscilloscope) under A/D converter device driver in the equipment list.

The analogue channels can be used to monitor analogue voltages, currents, temperature, tacho generators etc. With some extra tools like opto couplers LED’s of the EUT can be monitored. Apart from the AD converters, 'Field sensors', 'forward power', 'reflected power' and 'current probes' can be used as input.

The input channels are configurated under the AD-channel tab in the EUT window. In the AD Input, configuration menu each A/D channel can be switched on and off separately. If a channel is switched on, the following items can be configurated in the set-up menu of that channel:

If an A/D converter is used with a maximum input range of 1 V and an external shunt resistor of 0.1 Ω is used, the A/D configuration menu is set-up as the following:

The graph will be displayed with a scale from 0 to 0.1 A on the Y- scale, and the frequency on the X- scale (from the start frequency tot the stop frequency as entered under the test configuration menu).

Furthermore, drawing the graphs on the screen will also take some time. For maximum performance, do not leave all graphs open on the screen.

During a substitution test, a field sensor can be used to record the field strength near the EUT and record it in a graph. It should be noted that the presence of the EUT in the chamber will influence the field homogeneity in the close vicinity of the EUT. Therefore, the field sensor will probably not give the same reading as it would give in an empty chamber. The field sensor reading should therefore only be used as an indication. 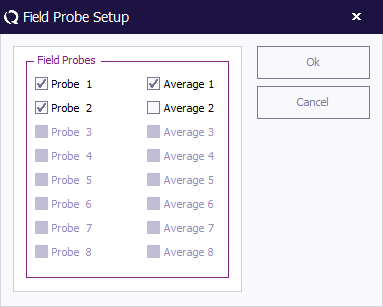 Current injection tests are more easily carried out and are less expensive than tests in an anechoic chamber (caused by the very expensive test equipment needed for radiated immunity tests).

Product improvements on an EUT therefore are more easily performed with a current injection set-up . For this purpose, during a substitution test, a current sensor can be used to record the RF current in one of the I/O cables of the EUT. RadiMation® can record the injected current in this cable due to the applied field.

This current sensor data can be used to simulate the influence to the EUT, in a current injection test set-up.

To get accurate current values, the current probe should be connected through a fibre optic cable in stead of using a coaxial cable. A coax cable will cause common-mode currents to flow on the screen, resulting in inaccurate test results.