Conducted immunity tests are a simulation of R.F. currents in cables, induced by R.F. fields of transmitters working in the lower frequency bands. At frequencies below 30 MHz it is quite difficult to generate an R.F. field in an anechoic chamber. This is caused by the fact that the wavelength of the test signal becomes increasingly longer at lower frequencies (l [m]= 300 / f [MHz]) and therefore, the transmitting antenna becomes either very long (± 5 meter at 30 MHz) or very in-efficient.

The dimensions of most anechoic chambers do not allow antennas greater than 5 meter (labda / 2). On the other hand, when smaller antennas are used, the power needed to generate a field becomes very high. At 30 MHz with a 3 meter EUT, Antenna separation, a transmitted power of approximately 500 W is needed. For frequencies below 30 MHz the desired power rapidly increases to several Kilowatts. During conducted immunity tests, a RF current is injected in to the cabling of the equipment under test. Different EMC standards use different methods to control the injected current. 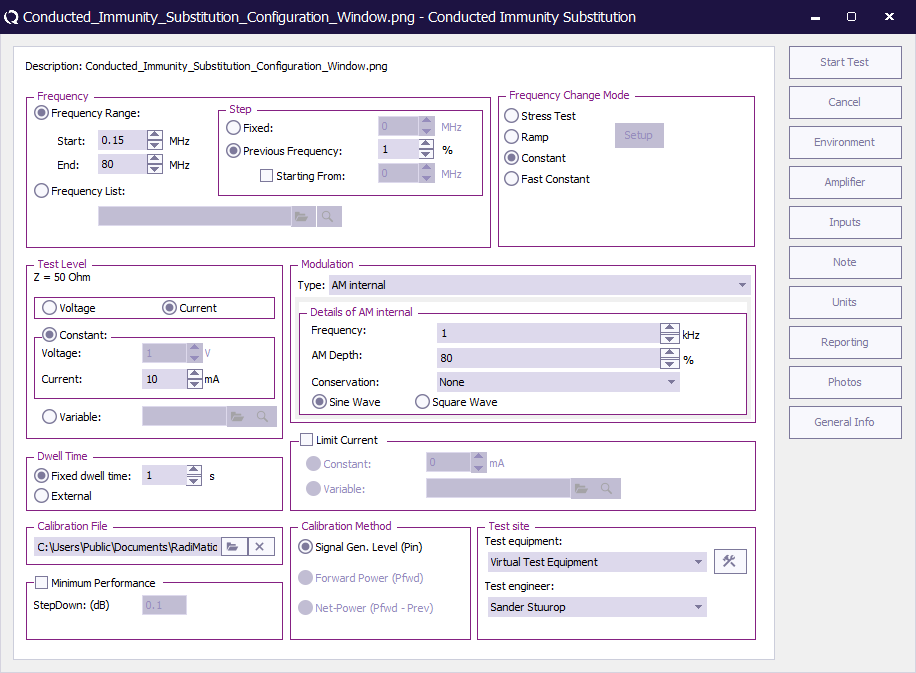 During current injection tests according to the substitution method, a constant voltage is applied to the injection clamp.

For tests in accordance to EN 61000-4-6 a CDN (Coupling Device Network) or injection clamp with characteristic impedance of 150 Ω is used. Before actual tests can take place, calibration of the test set-up is required. See the “Calibration” chapter for the method to calibrate the current clamp. During the calibration, a calibration file is made, which contains the drive levels for each test frequency. The values recorded in the calibration file are the forward power levels to the clamp, necessary to inject a constant current into a 150 Ω reference wire. For example, if a test level of 10 Vrms has to be injected, a current of 33 mA is injected in the 150 Ω reference wire (10 Vrms / (150 Ω + 150 Ω)).

After the test set-up has been calibrated, tests can be performed using the calibration file.

After the test set-up has been calibrated, tests can be performed using the calibration file.

Fixed generator tests can be useful during various kinds of EMC tests. During current injection tests, this method can be used to achieve the maximum injected current the amplifier is able to generate. Although this will not be a constant current over the frequency range, it can be useful during engineering work.

Fixed generator tests can be performed in three different ways:

Fixed signal generator output level. Tests with a fixed generator output level do not take cable losses and amplifier frequency response into account. No power meters are needed during these tests and therefore, the test speed is higher than the fixed forward and fixed transmitted power tests. Fixed Forward power level Tests with a fixed forward power level do take cable losses and amplifier frequency response into account. One power meter is required during these tests. This test method does not take VSWR mismatch between the amplifier and current probe into account (i.e.: the forward power and transfer impedance of the current probe alone is not enough to calculate the actually injected current). Tests with a fixed transmitted power level take cable losses, amplifier frequency response and VSWR mismatch into account. Two power meters are required during these tests, one to measure the forward power, and one to measure the reflected power. The difference between forward power and reflected power is the transmitted power.

The method relies heavily on EUT monitoring (see chapter 10) to determine at which level the Device Under Test is influenced. Before the test is started the relevant A/D-channels have to be configured. Pushing the input button on the configuration screen does this.

The test is started at a (low) injection level after which the current is increased with a specified increment till either of both situations arises. The current is limited by amplifier protection or the Device Under Test will be influenced in such way that the specified limits are exceeded. The field strength is than reduced with a specified step and the software will change to the next frequency point. This test will result in a graph showing the level to which the Device Under Test is unaffected by a current injection.

The following short cut keys can be used during manual mode.

For every conducted immunity test you can define a tolerance. This tolerance has great effect on the measurement. If you choose the tolerance to large then the test results are not usable, if you choose the tolerance to small then it could be that RadiMation® has problems performing the test correctly. For example if you define a tolerance of 0.1 dB and your system is only capable of measuring with an uncertenty of 0.2dB than it could be you get a very large event log. So what does it really mean this tolerance? The best way is to explain by using an example. Suppose you are performing a fixed power test, leveling is set on netpower. You have told RadiMation® to generate 50 dBm with a tolerance of 0.2 dB. When RadiMation® is leveling the power it will accept any power level between 50 and 50.2 dBm as a correct leveled value, and will continue with the test.