Does RadiMation support the linearity check that is described in the EN 61000-4-3 standard?

In RadiMation® it is fairly easy to verify that the amplifier is used in its linear range (and thus not saturated).

The EN 61000-4-3 2006 version specifies that the calibrations in the Uniform Field Area should be performed on electrical field strength that is at least 1.8 times higher than the field strength that will be used during the substitution test. It is also required that it is ensured that the amplifier is used in a range in which it is not in saturation. To be able to perform a substitution test on 10 V/m, it is thus necessary that the calibrations are performed on at least 18 V/m. The Uniform Field Area calculation can be performed as it is described in Chapter 12. After the the complete calculation has been performed, and a final calibration file has been created, it has to be ensured that the amplifier will not be used in saturation.

The easiest way to confirm that the amplifier is not used in saturation, is:

An example Microsoft Excel file, can be downloaded here, which can be used for the calculations.

Why are the Uniform Field Area calculations of expired standards not removed?

The calculation methods for the old standards (like EN 61000-4-3:1995) cannot be removed from RadiMation® due to the following reasons:

Is RadiMation® using the correct method for the Uniform Field Area calibration?

The latest EN 61000-4-3 standard describes two methods to perform a "field homogeneity verification" (also called 'Uniform Field Area calculation') (the constant field method and constant power method). RadiMation® supports the constant field method while this will result in the highest accuracy (With this procedure, the linearity error of the field probe is not influencing the calibration accuracy. While the linearity of a power meter is much better than the linearity of a field probe, this method is, from an accuracy point of view, the better solution). Although RadiMation® does not support both methods, this does not mean RadiMation® can not be used for field homogeneity verification, because according to the standard, both methods should result in the same calibration file.

Why is an immunity test trying to control a field sensor, if no field sensor is selected in the used testsite?

RadiMation® does not automatically disable a setting in a TSF file, if certain equipment is not selected in the selected testsite.

It can be possible that measurements procedures require that a field sensor is used during an immunity measurement. The fieldsensor is then activated in the Fieldsensor Inputs window of the TSF file. If however, due to circumstances the fieldsensor is not available in a certain situation, it is unacceptable that RadiMation® silently decides to not use the activated fieldsensor. The TSF that defines the exact measurement procedure should not be silently modified, because this can lead to unexpected results in future measurements. It is of course allowed that the test engineer modifies the TSF to disable the usage of the field sensor during a specific measurement, but in that case it is a thoughtful action by and the responsibility of the test engineer. RadiMation® does not silently perform adjustments to the configuration in a TSF file.

Why is a power delivery test performed, even if Forward power levelling is not selected?

When RadiMation® is instructed to use the forward power meter it will always perform a power delivery test.

The following situation will cause a forward power measurement:

In all these cases, also a power delivery test is performed.

Why is the signal generator carrier level limited to 0 dBm?

By default the input of an amplifier is limited to 0 dBm. This is a level that most amplifier can handle without breaking. If a higher or lower amplifier input level is needed, the amplifier input protection should be configured to that specific level. More information regarding the configuration of amplifier power protection can be found in Chapter 14 of the RadiMation® end-user manual.

Can I get the average or calculated field strength on the CAN bus?

There is an interface between RadiMation® and the CANoe/CANalyser software. More information is available on the CANoe page.

When the RadiMationInterface.can file is include in the CAPL project, you need to implement the functions:

These functions will be called when the information of the calculated or average electrical field is changing within RadiMation®.

This effect has been reported before, the problem is caused by measurement errors with a D.S.O. Due to aliasing problems.

Please read the explanation below.

In order to understand the problem we put in a green line to determine where the modulation was turned off. At first sight it looks like the part on the left and the first part of the right are correct. The amplitude during modulation should be 1.8 times higher then the CW value with 80% depth.

First check if the amplitude is correct, in a 50 Ohm system this can be calculated very easily. If the amplitude values are not what is expect there may be an aliasing problem with the oscilloscope. There is a very easy set up to check if this is the problem. 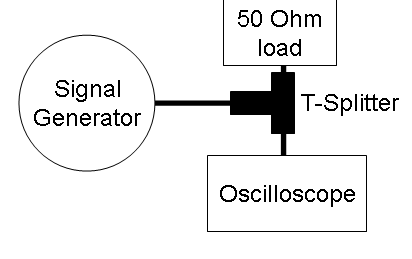 The 50 Ohm load is to make sure that you are measuring in 50 Ohm. When the oscilloscope has an 50 Ohm input impedance select this impedance and connect directly to the signal generator.

Follow the steps and compair the values by hand:

For the AM modulation the peak is 1.8 times higher so:

When the measured values are not what is expected, try increasing the number of samples on the oscilloscope, when is it no possible lower the carrier frequency until you do get the correct reading.

The definition of measured field, measured voltage and measured current

An example: in a radiated immunity substitution test with no modulation with a test-level of 10 V/m, the measured field strength will be 10 V/m, and this value will also be displayed. If the same test is performed with 80% AM Modulation, a field strength of 18 V/m will be measured. In this case the software will however display 10 V/m, because that is the requested test-level. The displayed values are still measured values, but the measured values are corrected for the applied modulation. The graphs are also corrected to show the the relevant level if conservation of the modulation is used. So if during the above example also voltage conservation of the modulation is selected, the carrier level will be 5.1 dB lower. The measured field strength will be 10 V/m again, and the graph will also display 10 V/m. As a result of this implementation, in an optimal situation, the values of calculated field, measured field and specified test-level should be displayed at the same values in the graphs.

Also the graphs for the current, voltage and power levels are corrected for the applied modulation and conservation. The corrections on the measured values are depending on the ability of the used measuring device to correctly measure a value when modulation is applied. If for example a field strength sensor makes an error during the measurement of the electrical field when modulation is also applied, the corrected and displayed value of the measured field strength will also not be accurate.

The CDN calibration is about 10 dB too high what is going wrong?

The amplitude modulated field measurement is higher then the CW test, how is this possible?

I have found a problem. What should I do?

If you have found a problem in the RadiMation® software, it is best to report it to us (for example through this online form). We will categorize the reported issue, register it in our defect database, and investigate the problem. When a workaround or solution is available, we will report this back to you.

I have another question, that is not answered yet

Just submit your question on RadiMation® forum or the online web-form. And we will give you an answer.